Satellite Networks put a lot of “stress” on applications that they don’t encounter in WANs or Mobile Networks. Whatever the waveband (L, S, C, X, Ku, K, Ka, etc.) the signal has to pass through the atmosphere, with distances ranging from around 1,200 miles or 2,000 km for LEO satellites to some 22,236 miles or 35,786 km each way for GEO satellites, which may be highly moisture laden or other interference may be encountered.

This “stress” results in:

By performing Satellite Network Emulation, using iTrinegy’s Network Emulators, these satellite conditions can be reproduced without satellites, terminals or satsims, and so application issues can easily and inexpensively be located and eliminated, before customer delivery.

In general, when looking to test applications over any type of network the first thought is to use the network itself – the “real network”. 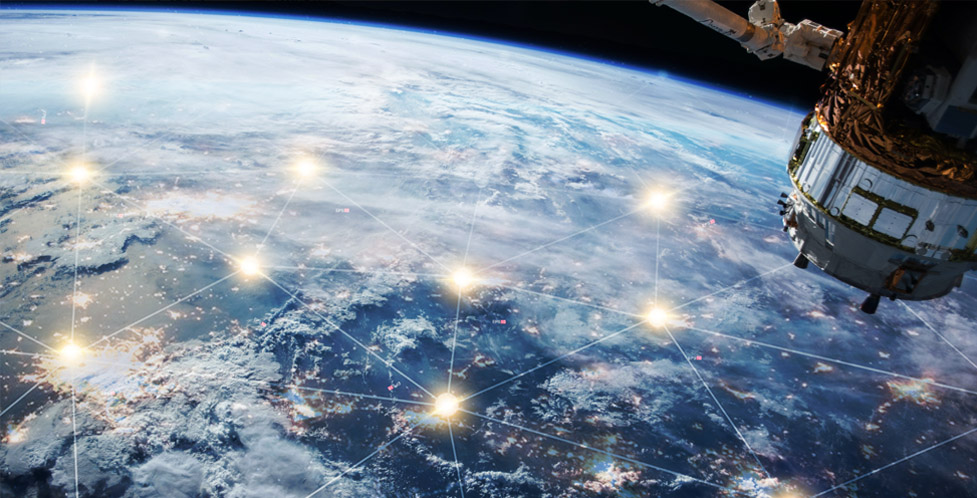 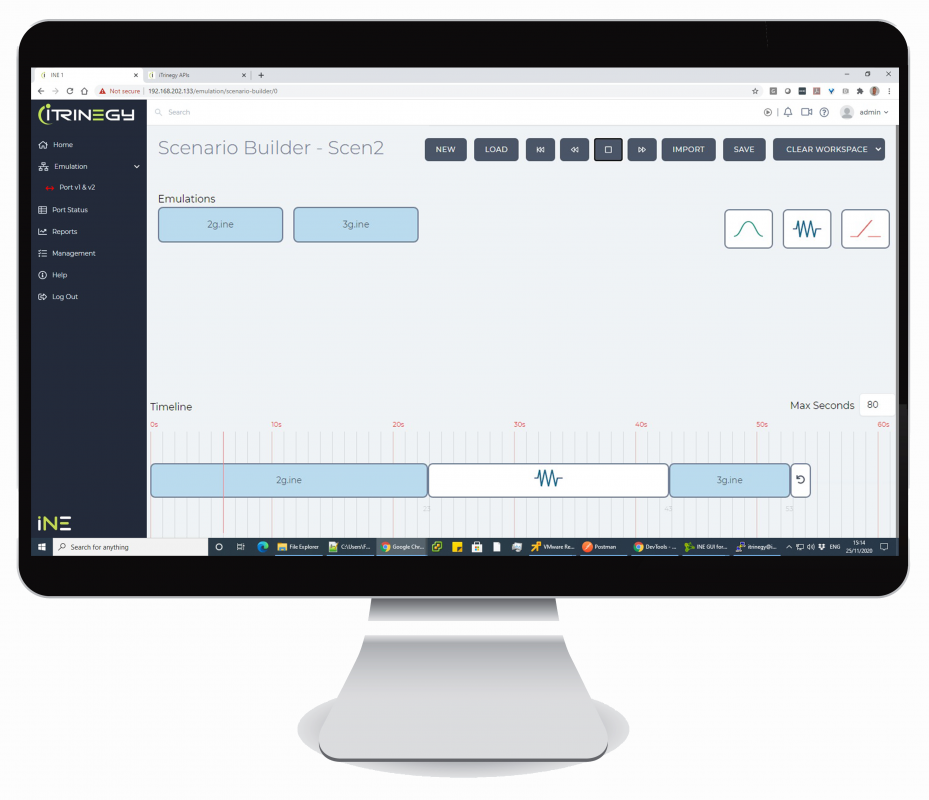 Using a “Real Network” has some general problems and some specific satellite problems:

Real Satellite networks, used for testing, are not usually realistic due to being unloaded

You cannot control a real Satellite network and put it into a particular condition e.g. poor weather, loaded, competition for access

Satellite Network Services are prohibitively expensive to replicate for testing

iTrinegy’s satellite network emulation can controllably and repeatedly produce all the basic characteristics that cause applications issues in VSAT, LEO, MEO and GEO satellite networks e.g.

Depending on our product model, between one and hundreds of Satellite links can be configured simultaneously and failover scenarios reproduced, like the switch from one waveband to another when quality is poor. All our models can graph network statistics for many hours and log them for many months.

Additionally with Ethernet connections there is no need for expensive satellite modems or terminals and satellite eliminators (satsim) combinations. 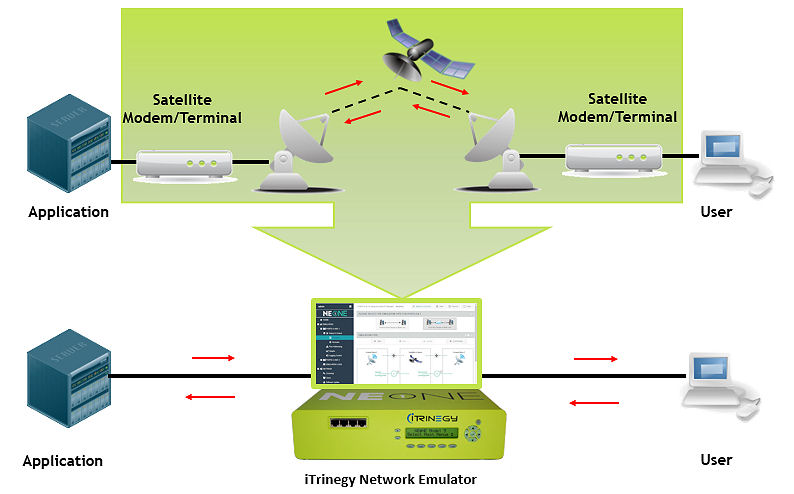 CompanyX has embarked on an ambitious multi-billion dollar plan to develop and deploy a constellation of several hundred satellites in LEO (Low Earth Orbit) in order to provide internet access in regions of the world where the infrastructure is not readily available. However, being situated in LEO, the communications links are constantly changing as the satellites move rapidly relative to the ground terminals. The challenge is to find a way to create a realistic test environment in which to effectively model such a dynamic network and verify that the data links are going to work. 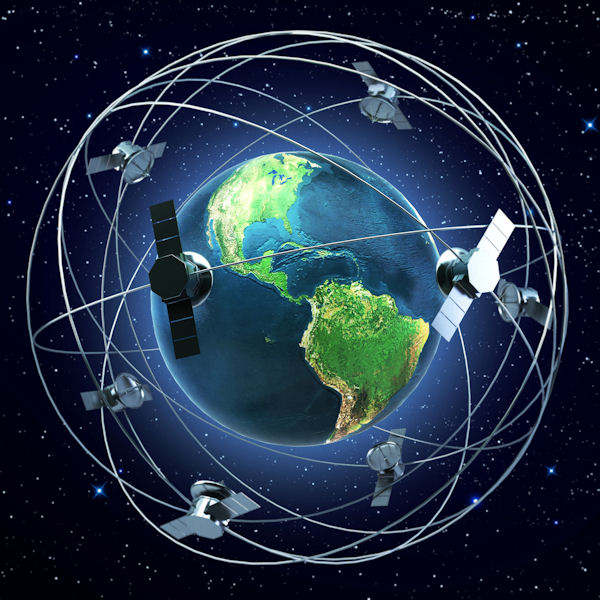 A colleague of <Name Protected>’s who had used iTrinegy’s NE-ONE Enterprise Network Emulator before, alerted him to its capability and prompted <Name Protected> to take a look, so an online demonstration was arranged. “I recognized it was a “user space app” so I knew that it should offer the flexibility and control that I thought we would need. I was impressed by the architecture that iTrinegy used in the NE-ONE Enterprise and that gave me confidence that its API would succeed where other products had failed me before. Its programmatic control would also enable us to achieve the extremely rapid network parameter changes that our testing required”.

Critical to CompanyX, and a feature that iTrinegy specifically engineered into the NE-ONE Enterprise product range, is the ability to simulate the handover capability at the IP level in order to reproduce the timing required in transmission while beams and satellites are being transitioned. <Name Protected> explains, “I use the NE-ONE Enterprise Emulator to pretend I am a user terminal somewhere on Earth with a particular satellite profile which comes with many different impairments including what kind of bandwidth I get under various conditions. The handover capability is a very important impairment in doing this. It is not something I would have expected in a generally available product so I wasn’t surprised that some specific software engineering would be required”. This unique feature is now a standard component of the NE-ONE Enterprise product range.

The combination of the NE-ONE Enterprise’s scalability features, automation and Handover capability provides CompanyX with the required test environment. As a result, <Name Protected> is able to run daily models with many different combinations of latencies, base error rates, signal strengths, power outputs and Signal-to-Noise ratios which will ultimately give particular error rates. 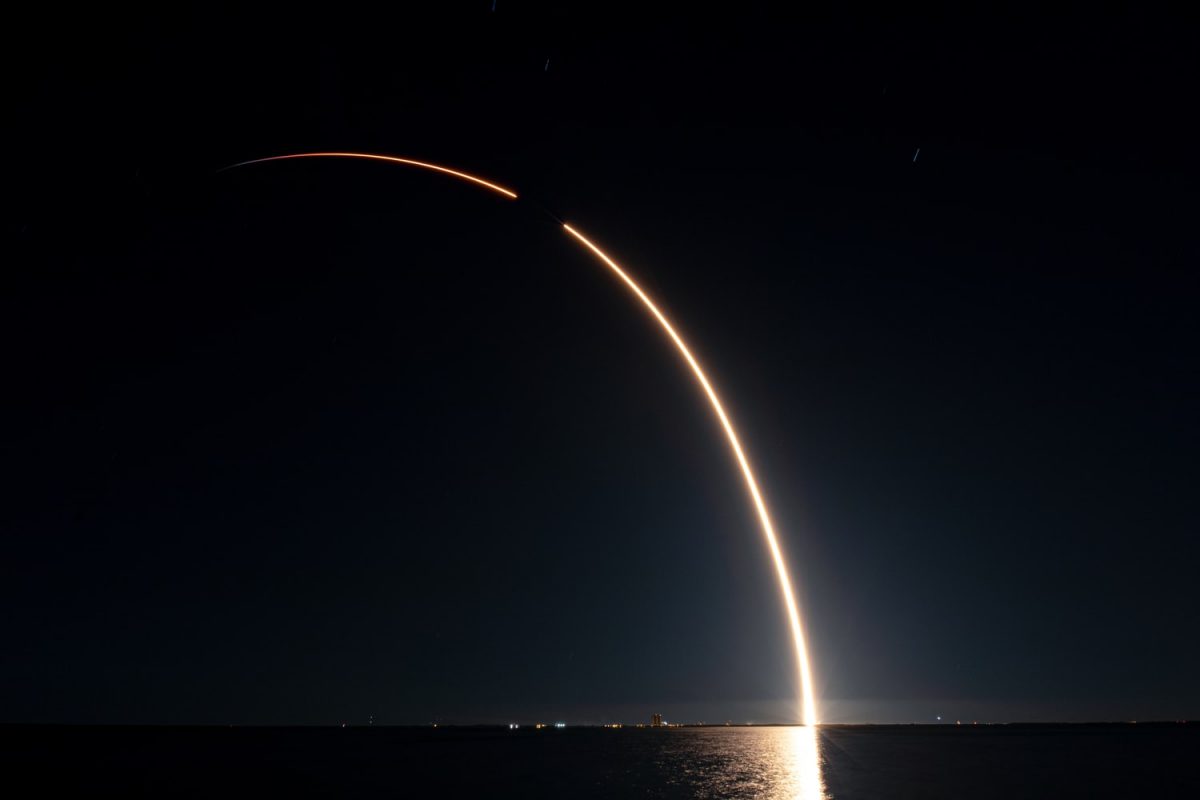 Satellites in LEO typically travel at around 17,500 mph (28,000 km/h) which
makes for an extremely dynamic network environment with parameters such
as bandwidth, latency and error rates changing in fractions of a second. The
challenge has been to find a way to create a realistic test environment in which
to effectively model such a highly dynamic network and verify that the data links
are going to work before the satellites are launched into space.

The next step for <Name Protected> was to consider DPDK-based userspace
networking which he realized could potentially offer the control and flexibility to
address the handover issues. This opened the possibility of using proprietary
DPDK-based network emulators. However, a lack of the automation required
to drive the necessary parameter changes at the speed needed to accurately
simulate the CompanyX network, quickly ruled out a large percentage of products on the market. “I had looked at several network emulators but one of the problems we had with them was the APIs used – they were not dynamically drivable via scripting in the way that we needed – our system is so dynamic it would be impossible for a human to drive it – you have to have automation to drive the impairments dynamically. Other products appeared to offer the required functionality but we quickly ruled them due to their prohibitively high costs”, commented <Name Protected>. 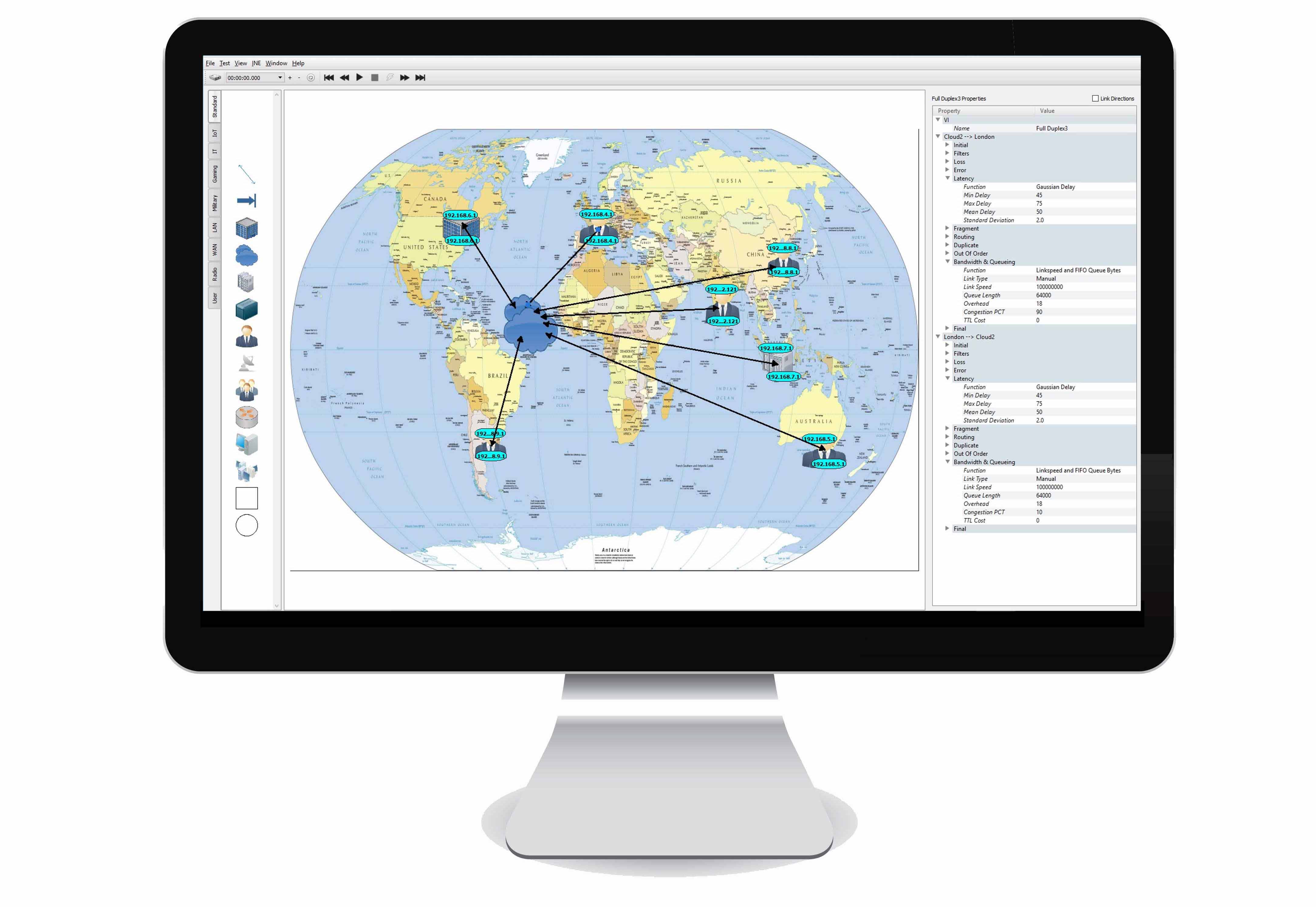 Everything In Place And Ready For Launch

The work <Name Protected> is undertaking is providing CompanyX with visibility
of how the satellite constellation is expected to perform. The next stage will be for
CompanyX to launch a small number of prototype satellites which should validate
the value of the modeling work carried out using the NE-ONE Enterprise network emulator as well
as providing real data that will be used to further refine and enhance the modeling
process, reduce development costs and increase confidence in subsequent satellite deployments.
<Name Protected> stresses the importance of undertaking realistic pre-deployment testing and the value the NE-ONE Enterprise has made to the process, “CompanyX is not your typical start-up building some web app which, if it fails, you reiterate the next version – this is a multi-billion dollar project involving hundreds of satellites and once you launch satellites into space you don’t get to change them later. However, I am confident with the approach we are taking; the NE-ONE Enterprise emulator is proving a great product for our needs and the support iTrinegy has provided has been amazing, I am happy with the way things are going”. 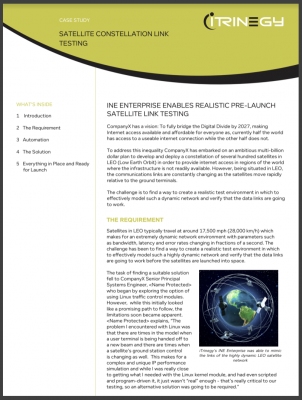 “Expensive & Unrealistic – The Problems with Testing over Live SATCOM Networks”. In this webinar, we show how iTrinegy’s Software Defined Test Networks can cost-effectively re-create any SATCOM environment you may need for testing.

You can find out more about how to recreate satellite networks in order to test application performance by watching the short video clip below.

Blog Part 1 – Why is satellite latency so high? 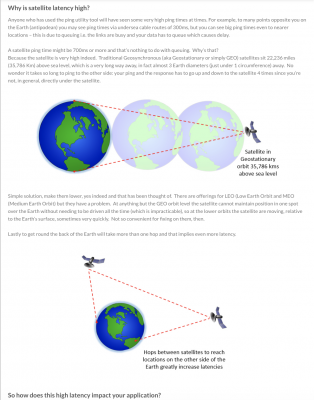 Blog Part 2 – What is jitter and should we care about it? 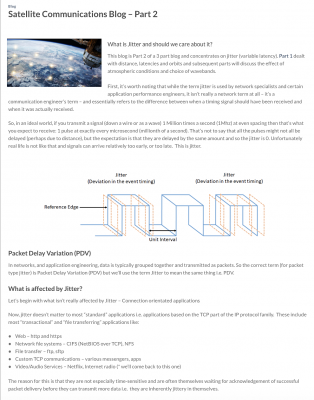